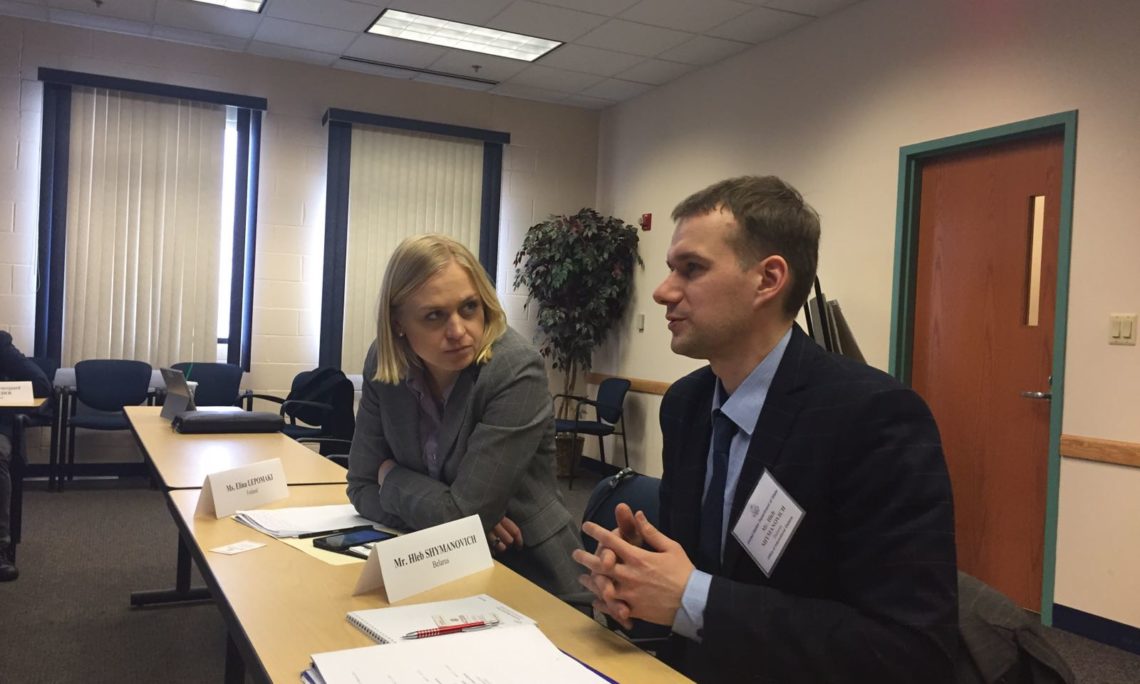 Hleb Shymanovich, an economist at the Research Center of the Institute for Privatization and Management in Minsk, took part in the International Visitors Leadership Program (IVLP), a U.S. Department of State flagship exchange program, on the topic of the contemporary U.S. economy. The program took place in March of 2017 and was attended by 20 participants representing European research institutes, business unions, mass media, and public organizations.

The participants visited four American cities: Washington D.C., New York, Detroit, and San Francisco, where they met with American officials responsible for the U.S. foreign economic policy development. They also had a chance to meet with entrepreneurs and civil society activists who play a role in determining the direction of economic development for individual cities and states in the United States.

Meetings in Washington D.C. focused on discussing the principles of financial market regulation, the latest changes in the U.S. foreign trade policy, and current challenges in the field of economic policy. Program activities in New York were highlighted principles of state financial sector activities, as well as the state policy on attracting foreign investment and providing support for the export sector. Meetings in Detroit addressed the development of small businesses as a tool for the city to find its way out of its structural crisis. In San Francisco, the participants were able to discuss with local officials and business representatives the development of new forms of entrepreneurship that are based on online platforms.

“The most vivid impression for me was the visit to Detroit. On the one hand, everything in the city talks about the economic decline associated with the long-term stagnation of the automotive industry. On the other hand, one can clearly see the sprouts of a new economy based on the development of small businesses, services and a technology sector. I will follow the development of Detroit with genuine interest, sincerely worrying for its success. I sincerely wish that everything works out well for the people who took responsibility for the formation of a new image of the city.

Overall, the program appeared to be extremely diverse and rich. It provided the participants with an immense amount of information on how the U.S. economic policy reacts to current challenges and in which direction the American economy is developing. Additionally, the program has significantly broadened my scope of understanding of what economic policy can be like.

The IVLP program provides participants with a unique opportunity to exchange their views and knowledge. This communication results in a better understanding of people from other countries. I hope that three weeks of communication made it possible for other participants to form a correct idea of Belarus.

I believe that the profound involvement of the U.S. Department of State’s Bureau of Educational and Cultural Affairs and the Global Ties Network in my program is what made the experience undoubtedly successful and tremendously beneficial for all the participants.  Thank you!”