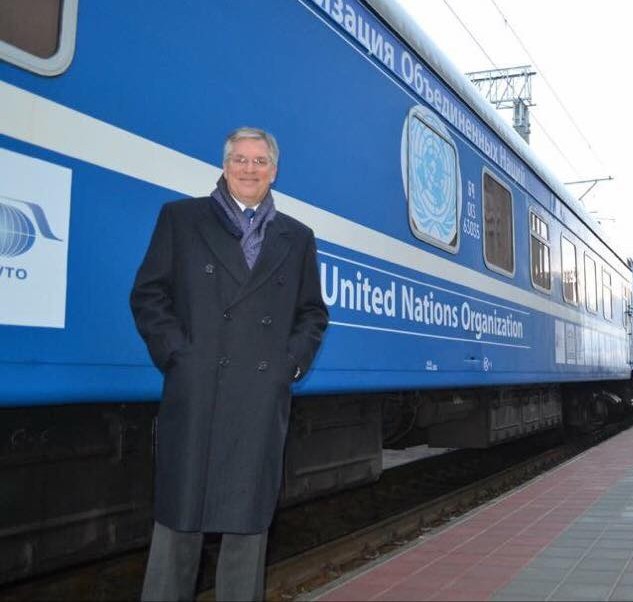 On October 23-30, Charge d’Affaires Scott Rauland took part in a week-long United Nations-Belarus joint initiative “UN70 Belarus Express: Towards Partnership for Sustainable Development” to commemorate the 70th anniversary of the foundation of the international organization. Both Belarus and the United States were among the founding nations of the UN, which is headquartered in New York.  Charge Rauland participated in a number of high-level meetings and U.S. Embassy- and UN-sponsored public events along the way of the special UN train that took representatives of UN member states and Belarus government, civil society and private sector, artistic community and youth to all regions of Belarus.  Mr. Scott Rauland visited Grodno, Gomel, Mogilev and Vitebsk, and along the way introduced an American-sponsored musical band “Blended 328” to enthusiastic audiences in Minsk, Gomel, Mogilev and Vitebsk. The U.S. musicians from Nashville, Tennessee, their brand of country and rock music, and message of diversity and inclusion were warmly received throughout Belarus.  In Gomel and Vitebsk, the U.S. Chief of Mission  delivered  3D printers and maker space resources to partner libraries.  He also visited Special Scholl #5 in Gomel and presented a collection of books that promote creativity in kids. Charge d’Affaires attended partner-NGO and partner-Governmental organizations’ events and cultural activities to highlight successful examples of US-Belarus cooperation and to help create fertile ground for future partnerships.