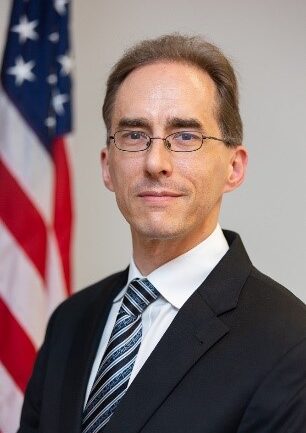 Jeffrey Giauque is a career member of the Senior Foreign Service. He has been the Chargé d’Affaires at the U.S. Embassy in Minsk, Belarus, since July 2020.  He previously served as a Member of the State Department’s Policy Planning Staff, where he was responsible for providing policy analysis and advice on the European Union, the Western Balkans, and the countries of the former Soviet Union.  Mr. Giauque’s previous overseas tours include Croatia, Nicaragua, Serbia, and Turkmenistan.  In Washington, Mr. Giauque has worked in the State Department’s Operations Center, its Office of Israel and Palestinian Affairs, and twice in its Office of European Union and Regional Affairs.

Mr. Giauque has a BA in history and French from the University of Utah and an MA and PhD from Ohio State University in European international history and the history of American foreign relations.  He wrote his doctoral dissertation on the European Economic Community, the predecessor of the EU, and taught international relations and European history at Miami University (Ohio).  He speaks French, German, Croatian, Spanish, and Russian.  Mr. Giauque is married to Foreign Service Officer Ivna Giauque and they have two children. He is the recipient of numerous Department awards, most notably the 2019 Rockwell Anthony Schnabel Award for Advancing U.S.-EU Relations.