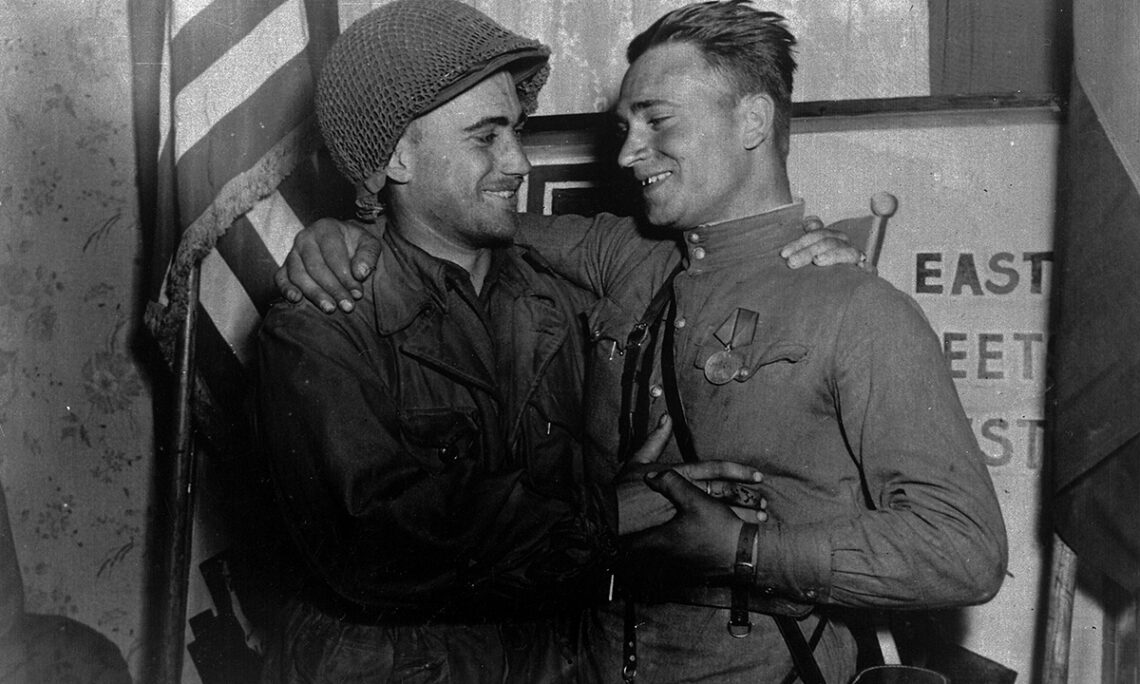 Robertson and Silvashko meet after 30 years in Moscow in 1975.
Davis Center, Harvard University

Some readers may recognize the photo of an American and a Soviet soldier embracing after meeting in April 1945 at the Elbe River in Germany. They represented the historic coming together of American and Soviet armies that culminated in Germany’s surrender weeks later.

In 2005, as U.S. ambassador to the former Soviet republic of Belarus, I was looking for ways to commemorate the 60th anniversary of the end of World War II, a war that left its tragic mark on practically every family in Belarus. I also wanted to improve America’s image among Belarusians in the midst of a hostile state media environment. Perusing a local newspaper, I found tucked away in the back pages a small item about the famous photograph, noting that the Soviet soldier, Alexander Silvashko, lived in a remote village in Belarus. I immediately determined to meet him.

Mr. Silvashko warmly welcomed us. He lived alone. His wife had died a few years before, and he had long retired as director of the village school where he also taught history. Over tea, Silvashko vividly recalled his meeting with the American soldier in the photo, Lieutenant Bill Robertson.

As the U.S. Army advanced through Germany from the West, Silvashko recounted, Robertson’s commander had tasked his unit to find the Soviet armies then moving in from the East. Hoping to be the first American to meet the Soviets, Robertson defied orders and drove beyond his authorized perimeter to reach a bridge spanning the Elbe River in the town of Torgau. Silvashko, a lieutenant in the Soviet army, had also reached the bridge on the Elbe’s eastern side. He saw a group of soldiers in strange uniforms on the other bank waving a white sheet painted with red stripes and a blue smudge.

Never having seen an American flag or American soldiers, he thought the group could be Germans attempting to entice his unit across the half-destroyed bridge into an ambush. Silvashko ordered his men to lob a couple shells at the group, scattering them.

After a few minutes, one of the group, Robertson, returned to the bridge unarmed and, with hand signals, urged Silvashko to come across and meet him halfway. Silvashko did so, climbing across the fractured beams until he reached Robertson. Although neither could understand the other’s language, through gestures each finally made out who the other was. The Allies had finally united!

Robertson then invited Silvashko to come with him to American headquarters. When Silvashko, along with his two superior officers, arrived, the Americans feted them with food, drink and exchanges of insignia and wrist watches. It was then that a photographer snapped the famous photo.

The next morning, the Soviets returned to their lines where the two senior officers were promptly arrested, sent home and stripped of their party membership. (They were no doubt lucky that was the extent of their punishment.)

Many times Silvashko said if only the comradeship … had endured, what a different and better world it might have been.

Silvashko said he was too young and stupid to be punished; and besides, his unit was moving on to engage the Germans in more bloody fighting in Czechoslovakia. Robertson, too, was arrested for disobeying orders, but he was quickly released under General Dwight Eisenhower’s personal order.

After the war, Silvashko returned to his native Ukraine to find his family and his village wiped out. Army comrades from Belarus encouraged him to settle there in the small village of Morach where he would spend the rest of his life. Robertson went on to study medicine and became a noted neurosurgeon in Los Angeles.

Silvashko and Robertson did not see each other again until 1975, when détente between the United States and the Soviet Union brought them back together in Moscow to commemorate the 30th anniversary of their meeting on the Elbe. Silvashko showed us a photo album of a subsequent time when Robertson, and other Americans who were at Torgau, visited Silvashko in Morach together with their spouses.

Shortly after our visit, the embassy public affairs section sent a team down to Morach to film an interview with Alexander Silvashko. It would become the centerpiece of a film the section produced titled “The History of a Handshake.” We were able to unveil the film to the Belarusian public in time for the Victory Day commemorations (the Russian language version can still be viewed online). Public reaction was overwhelmingly positive. Even the Belarusian government, with which we were not on the best of terms, indicated tacit approval.

Watching the film brought tears to the eyes of many viewers. It still brings tears to mine. In subsequent ambassadorships, I gave copies of the film to my Belarusian, local and even Russian counterparts, some of whom told me how they and their staffs wept while viewing it.

A few months after we made the film, we invited Silvashko to the Belarusian capital of Minsk to retell his personal tale to a group of visiting West Point cadets along with their Belarusian counterparts. He overwhelmed them. To top it off, the Belarusian Defense Ministry gave Silvashko, who up till then had lived largely in obscurity, full military honors when he laid flowers at Minsk’s Victory Monument. The Defense Ministry later told our defense attaché how much our embassy’s respect and attention to this simple veteran had impressed them.

Although Bill Robertson died in 1999, Alexander Silvashko never forgot his friend. And I will never forget Mr. Silvashko. He survived a brutal war and a harsh postwar life. Many times he said that if only the comradeship American and Soviet GIs enjoyed during those fleeting days in 1945 had endured, what a different and better world it might have been.

Alexander Silvashko died a few years ago. May he rest in peace along with his friend Bill Robertson. As we mark the 75th anniversary of the end of World War II, the story of Silvashko and Robertson’s historic meeting on the bridge at Torgau should inspire us. We should also draw inspiration from Embassy Minsk’s public affairs effort to bridge diplomatic divisions through shared memory. George Krol retired to Middletown, Rhode Island, in 2018 after 36 years in the Foreign Service, during which he served in Poland, India, Russia and Ukraine, and as ambassador to Belarus, Uzbekistan and Kazakhstan. Domestically, he held positions of, inter alia, deputy assistant secretary of State for Central Asia and director of the Office of Russian Affairs. Ambassador Krol teaches an elective course on the former Soviet world as an adjunct professor at the U.S. Naval War College in Newport, Rhode Island, lectures locally on foreign policy topics and is an associate of Harvard University’s Davis Center for Russian and Eurasian Studies.