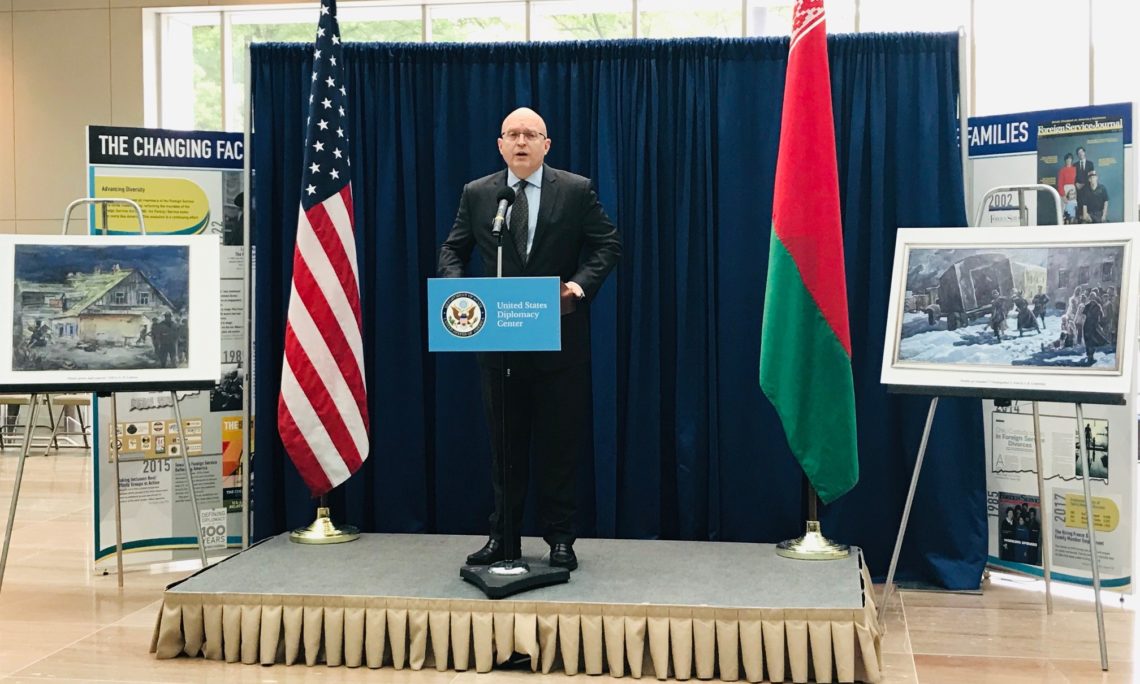 Thanks, Tom. I am delighted to be here today. I bring you greetings from Secretary Pompeo. I was just with him in his office discussing a number of current policy issues. I probably I should have mention the terrific catering we have here for Passover. Before I get to the reason we are here today, I want to offer our condolences from the State Department to Rabbi Yisroel Goldstein, the family of Lori Gilbert-Kaye, and the entire congregation of the Chabad synagogue in San Diego for the horrible act of hatred that took place last Friday. We condemn this horrendous act and every act of anti-semitism, and stand with Rabbi Goldstein and his congregation.

Deputy Foreign Minister Krawchanka, Excellencies, Ladies and Gentlemen, welcome again to the State Department for this year’s commemoration of Yom HaShoah, the Holocaust Day of Remembrance. And a special welcome to Saveliy Kaplinsky, a survivor of the Minsk Ghetto, who will share with us his experiences during the program following this reception. It is a tremendous honor to have Mr. Kaplinsky with us and it is an honor for me to meet you. There is really no substitute for hearing the words of someone who lived through one of the most horrific tragedies in human history, so we are honored to have Mr. Kaplinskiy with us today. I’d also want to recognize Svetlana Gebeleva, the daughter of Mikhail Gebelev, leader of the resistance in the Minsk Ghetto. I am happy to have a chance to meet Svetlana.

I am particularly pleased that we have partnered this year with Belarus, a country which suffered immensely, and unimaginably, during the war and is incredibly important for our understanding and remembrance of the Holocaust.

The Minsk Ghetto was one of the largest in Nazi-occupied Europe, with over 80,000 Jews crammed into a tiny living space. In the two years of the Ghetto’s existence, tens of thousands of Jews were killed in mobile gas vans, executed in the nearby village of Maly Trastsyanets or deported to death camps. But the Ghetto was also a center of resistance and hope. In August 1941, Jews established an anti-German underground in the Minsk Ghetto. Some, like Mr. Kaplinskiy, were able to escape and join partisan units in the nearby forest. In fact, Jews from Minsk established seven different partisan units. In all, about 10,000 Jews fled to the forests to fight Nazi forces during the war.

I am also pleased to partner this year with Belarus because of the strong connection with many U.S citizens, particularly our Jewish citizens, have to that country. In fact, many Americans of Jewish ancestry can trace their roots to what is now Belarus. These include some well-known people like designer Ralph Lauren, actor Harrison Ford, singer Mel Torme, author Herman Wouk, who actually wrote about this era in history, and for those of us are old enough to remember, musician Tiny Tim.

Belarus and the United States have a shared interest in the preservation of the rich Jewish heritage of that country, a heritage we consider part of our own, and that was almost completely destroyed by the Holocaust. Through the U.S. Commission for the Preservation of America’s Heritage Abroad, we are working with our Belarusian colleagues to restore historic Jewish cemeteries and other important sites, including the Mir Yeshiva, once one of the most important centers of Jewish learning in all of Europe.

Recently, the discovery and careful handling of the remains of more than 1,200 Holocaust-era victims at a construction site in Brest, on the border with Poland, demonstrated the sensitivity and goodwill of both the local and national governments in Belarus. With assistance from the Israeli Embassy, Belarusian authorities agreed to facilitate the transfer of the remains to a local cemetery to await a proper Jewish burial in a consecrated plot, while the area where the bodies were found will be turned into a green zone and memorial. It’s inspiring to see the kind of support we had to remember what people lived through, and so that we can assure that this will never happen again.

Today’s event and our broader partnership on Jewish heritage conservation highlight our increasingly open and pragmatic relationship with Belarus- something that the Deputy Foreign Minister and I discussed yesterday. The United States is very hopeful that these connections and shared interests will serve as a foundation to expand relations, as we increase diplomatic engagement between our two countries and identify additional areas of mutual interest. As my diplomatic colleague said, it’s important to view history not as a prison but as a school. I think that is what we can commemorate right here today. Thank you.