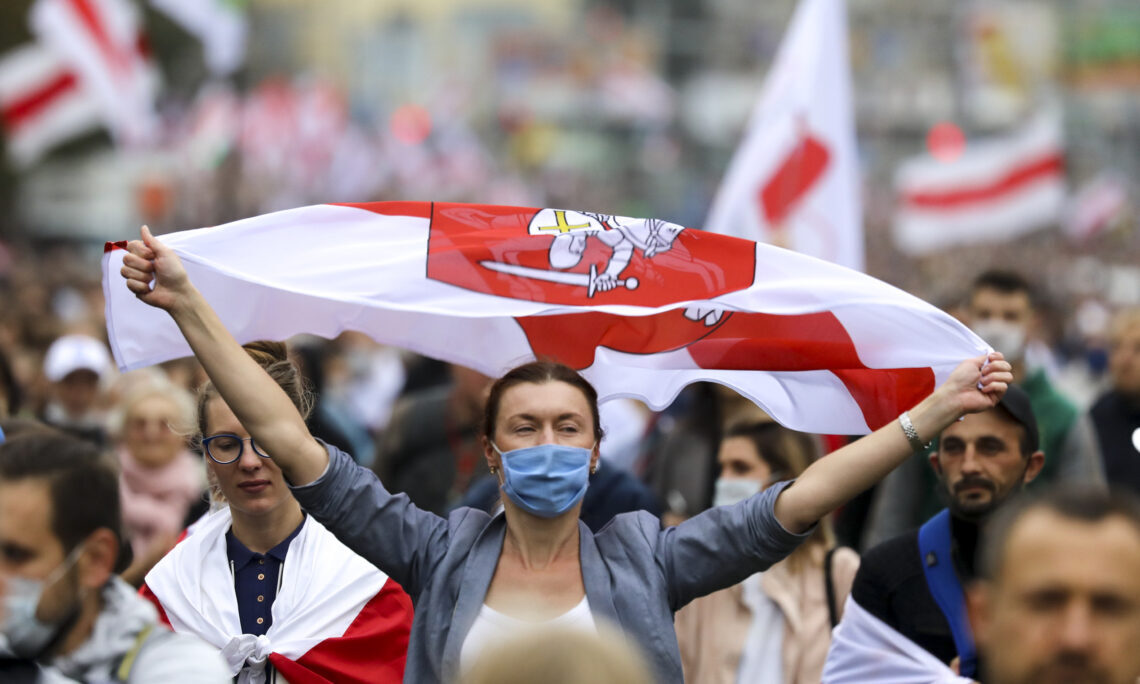 A demonstrator wearing a face mask to protect against coronavirus waves an old Belarusian national flag during an opposition rally to protest the official presidential election results in Minsk, Belarus, Sunday, Sept. 27, 2020. Hundreds of thousands of Belarusians have been protesting daily since th

Mr. Chairperson, at the final PC of the year, it is appropriate that we take stock of events in Belarus since the fraudulent August 9 presidential election.  We continue to be troubled by ongoing reports of violence against peaceful protestors, journalists, lawyers, students, pensioners, strikers, and other Belarusian citizens exercising their human rights and fundamental freedoms.

Just last week on December 9, the United States Embassy in Minsk, together with colleagues from the EU, UK and Switzerland, met with Belarusian Foreign Minister Vladimir Makei.  During that meeting we urged Belarus to cease unjust detentions and violence; release all political prisoners and all those unjustly detained; to prosecute those who authorized and perpetrated acts of violence and inhumane treatment against protesters and detainees; and conduct a free and fair election under independent OSCE observation.  Today, we repeat that call here in Vienna.

Mr. Chairman, the United States has been inspired by the bravery and resilience of the Belarusian people seeking to ensure their voice is heard in determining their country’s future.  The United States remains deeply concerned at the continued detention of Council member Maria Kalesnikava for her efforts to facilitate a national Coordination dialogue.  Along with Kalesnikava, Belarusian authorities currently hold over 150 political prisoners.  We urge Belarusian authorities to release her and all other political prisoners immediately.

We remain committed to supporting Belarus’s sovereignty and territorial integrity, as well as the right of the Belarusian people to choose their own path, free from external intervention.  By sanctioning human rights abusers and others who seek to deny the legitimate voice of the Belarusian people, we—together with the EU, UK, Switzerland, and Canada—are sending a strong signal that business as usual cannot continue, that those who commit abuses should be held to account, their identities revealed and collected , and that there can be no improvement of relations with a regime that brutally represses its own people and avoids dialogue on the way forward.  It is important that the OSCE remain focused on Belarus as we head into 2021.

We welcome the OSCE’s active engagement on Belarus, particularly since the fraudulent election.  We are proud to have joined 16 other participating States to invoke the Moscow Mechanism in September to address serious concerns regarding Belarus’s failure to uphold its human dimension commitments.

At the Ministerial, the distinguished Belarusian Foreign Minister suggested we “discuss seriously” what concrete suggestions the OSCE has regarding the situation in Belarus.  The recommendations in Professor Benedek’s report provide the Belarusian authorities and the OSCE participating States with a roadmap out of this crisis, and I would welcome the opportunity to have an honest discussion about these recommendations.
Thank you, Mr. Chair.