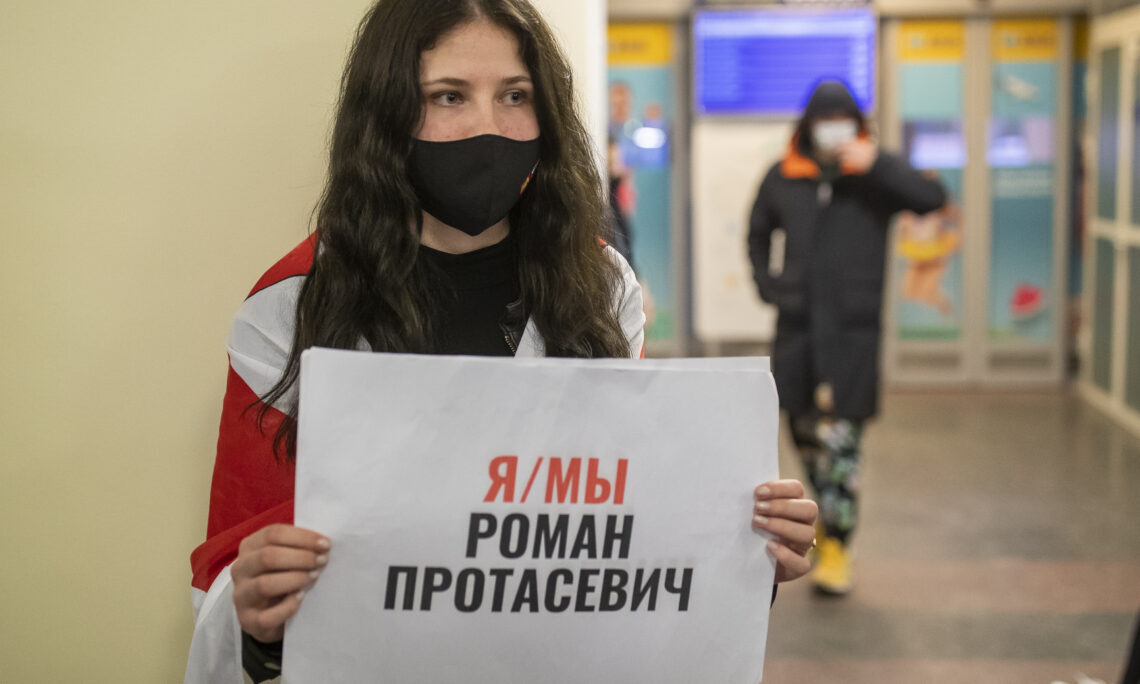 A woman holds a poster reads "I'm/we're Raman Pratasevich" as she waits to see passengers of the Ryanair plane with registration number SP-RSM, carrying opposition figure Raman Pratasevich which was traveling from Athens to Vilnius and was diverted to Minsk after a bomb threat, after its landing at

As delivered by Chargé d’Affaires Courtney Austrian
to the Special Permanent Council, Vienna
May 25, 2021

The United States strongly condemns the forced diversion to Minsk of a flight between two EU member states and NATO Allies which appears to have been based on false pretenses, endangering more than a hundred lives of those onboard, and the subsequent arrest in Minsk of journalist and Nexta telegram channel co-founder Raman Pratasevich and his associate Sofiya Sapega.  We join the many others in this room to demand their immediate release.  As Secretary of State Blinken said, this was a shocking act.

A full and transparent investigation into the incident is essential, and all that played a role in these blatant actions should be held to account.  Reports indicating the involvement of the Belarusian security services and the use of Belarusian military aircraft to escort the plane are deeply concerning.  We cannot allow this egregious action to go unchallenged and set a disturbing new precedent for authoritarian abuses.

We are closely coordinating our response with our partners, including EU, Lithuanian, and Greek officials.  Given strong indications the forced landing was based on false pretenses, we support the planned May 27 meeting of the Council of the International Civil Aviation Organization to review these events, and if necessary, pursue disciplinary actions.

That the Lukashenka regime went to such lengths to capture Raman Pratasevich underscores the regime’s fear of independent media and critical voices.   Mr. Pratasevich has committed no crime, yet he faces charges carrying a sentence of up to 15 years imprisonment in retaliation for his journalistic activity.  The Lukashenka regime has made it clear it considers Mr. Pratasevich an opponent.  We are extremely concerned about his potential mistreatment in detention.  The Belarusian authorities are fully responsible for Mr. Pratasevich’s and Ms. Sapega’s safety and health.  Mr. Pratasevich’s work over the past year exposed acts of police brutality and torture, which were further corroborated by the Moscow Mechanism expert report.  Belarus should release Mr. Pratasevich immediately and investigate the brutality he helped expose.  We, as participating States, have signed up to a range of political commitments to support independent media as an essential component of a free society and democratic, accountable government.

The United States unequivocally condemns the Lukashenka regime’s ongoing harassment and detention of journalists, members of the opposition, and civil society for exercising their human rights and fundamental freedoms.  We call for the immediate release of all those unjustly detained.  We stand with the Belarusian people in their aspirations for a free, democratic, and prosperous future and echo their call for the regime to respect human rights and fundamental freedoms, engage in a genuine, facilitated national dialogue, hold new free and fair elections, and immediately release all political prisoners.