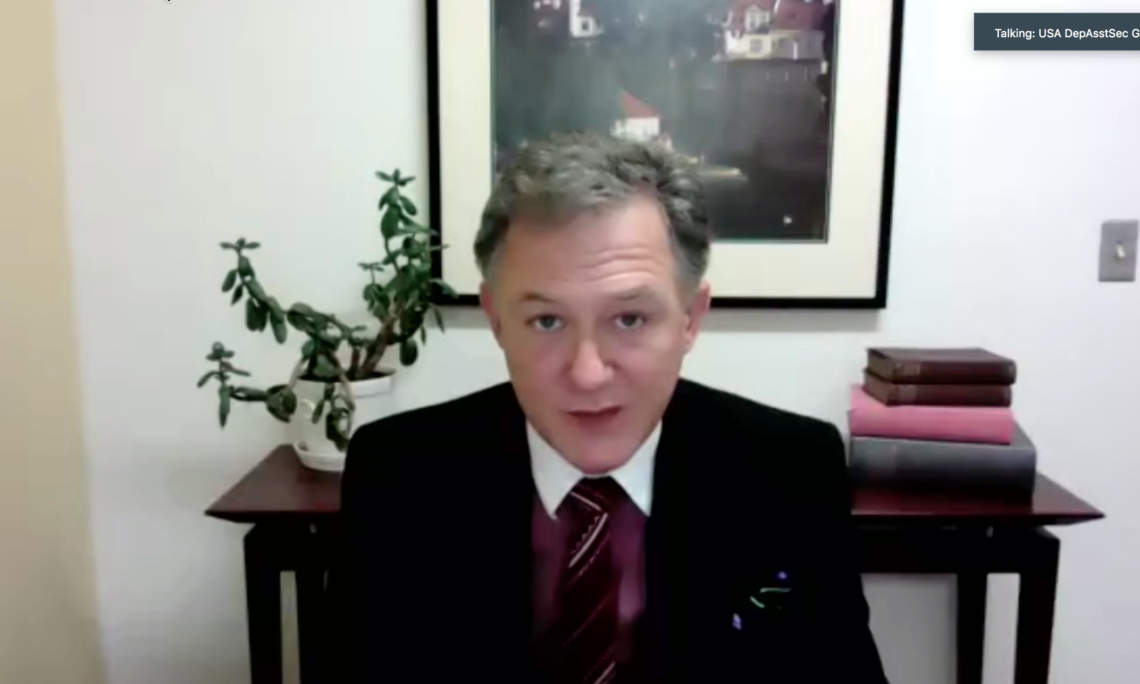 As prepared by DAS George Kent
to the OSCE Side Event on Belarus
Tirana, Albania (remotely, via Zoom)
December 3, 2020

As we conclude today’s event, I want to express my government’s thanks to our UK colleagues, the other co-sponsors, and Minister Kofod of Denmark for his keynote remarks. We appreciate their leadership in drawing attention to the serious challenges facing Belarus. We all share a common determination to keep the rightful aspirations of the Belarusian people, rights guaranteed in their own Constitution and the OSCE founding principles, in the international spotlight.

Since the fraudulent August 9 presidential election in Belarus, the United States has been inspired by the bravery and resilience of the Belarusian people seeking to ensure their voice is heard in determining their country’s future. We will remain committed to supporting Belarus’ sovereignty and territorial integrity, as well as the right of the Belarusian people to choose their own path, free from external intervention. By sanctioning human rights abusers and others who seek to violate the rights of the Belarusian people, we – together with the EU, UK and Canada – send a strong signal that business as usual cannot continue, and those who commit abuses should be held to account. It is important that the international community remain united on Belarus as we head into 2021.

The OSCE has been invaluable as the focal point of our multilateral efforts to address the ongoing crisis. It is particularly well suited to the role, given its deep, hands-on experience promoting democratic and electoral standards, and the essential human dimension. As a participating State, Belarus has made clear commitments on democracy and human rights. Unfortunately, Belarusian officials have flagrantly disregarded those commitments in the election season and the aftermath. This not only undermines our common security, but also offends the basic moral principle that a government should not subject anyone to arbitrary detention, abuse, and torture, not to speak of thousands of its own citizens.

We welcome the OSCE’s active engagement on Belarus, particularly since the fraudulent election. We are proud to have joined 16 other participating States to invoke the Moscow Mechanism in September to address serious concerns regarding Belarus’ failure to uphold its human dimension commitments. We regret Belarus did not cooperate with the Moscow Mechanism process. Nonetheless, Professor Benedek produced a detailed report which paints a clear picture of sustained human rights violations and abuses committed on a massive scale and with impunity by Belarusian authorities. The United States appreciates Professor Benedek’s efforts and thorough recommendations for Belarusian authorities, the OSCE, and the wider international community.

must start with an immediate end to violence against the Belarusian people and the release of all those who have been unjustly detained. The way forward also must include accountability for past and ongoing abuses. A meaningful national dialogue between the Belarusian authorities and authentic representatives of Belarusian society must begin. We regret Belarus has not accepted the OSCE Chair’s offer to facilitate such a dialogue. We continue to call on Belarus authorities to do so. Genuine dialogue between Belarusian authorities and representatives of society, particularly the Coordination Council, remains the necessary next step.

We raise our concerns about the election and widespread human rights violations each week in the Permanent Council, including when U.S. Deputy Secretary of State Steve Biegun and I traveled to join a special session chaired by Albanian PM Rama on August 28. The Permanent Council has been a valuable forum to bring attention to the cases of individual detainees and abuse victims. We are grateful to the Albanian Chair for its principled work over the past year.

The United States and other world leaders continue to call on Belarusian authorities to allow the exiled Roman Catholic Archbishop Kondrusiewicz, to return home to his country immediately.

As Belarusian civil society representatives have noted today, ongoing human rights violations and abuses in Belarus remain a serious threat to the security of Belarusians. They are also a serious threat to our common security. This crisis will not be resolved through brute force. The Belarusian people, who continue to courageously and peacefully insist that their voices be heard and their rights respected in the face of violent repression, have made that clear.

And we have heard them. We will continue to uphold OSCE values and principles in the year ahead, in support of the Belarusian people and their rightful efforts to secure a better future. Under the direction of the Swedish Chair, the OSCE will remain a primary forum for that collective endeavor in the year ahead. Дзякуй/Dzyakuj. Thank you.