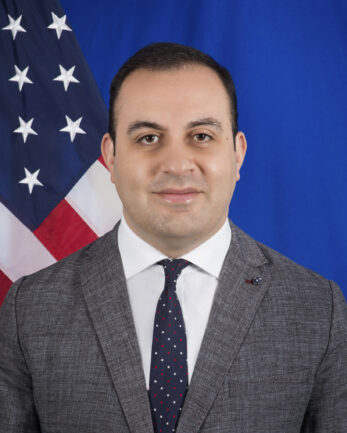 In the absence of the Ambassador Extraordinary and Plenipotentiary, the Chargé d’affaires ad interim is responsible for representing the United States of America in the Republic of Belarus, conducting the Foreign Policy of the United States as well as directing, coordinating and supervising the Embassy personnel under his/her authority.

Ruben Harutunian assumed his duties as deputy chief of mission (DCM) at the U.S. Embassy in Minsk, Belarus on May 24, 2021. Immediately prior, he served as a senior advisor at the Foreign Service Institute’s Leadership Management School and as director of the State Department’s Office of Press Operations. Earlier, he was the Public Affairs Officer in Algiers; Deputy Chief of the Political/Economic Section in Yerevan; Special Assistant to Secretaries of State Clinton and Kerry; Political Officer and Staff Assistant to the Ambassador in Moscow; and Vice Consul and Deputy Spokesperson in Tel Aviv. Ruben is a Thomas R. Pickering Foreign Affairs Fellow and a Milken Scholar. He graduated from Johns Hopkins University’s School of Advanced International Studies (SAIS) with an MA in International Relations focusing on Conflict Management and has a BA in Middle East and Asian Languages and Cultures from Columbia University. He is married to Astghik, and they are the proud parents of their daughter and son.