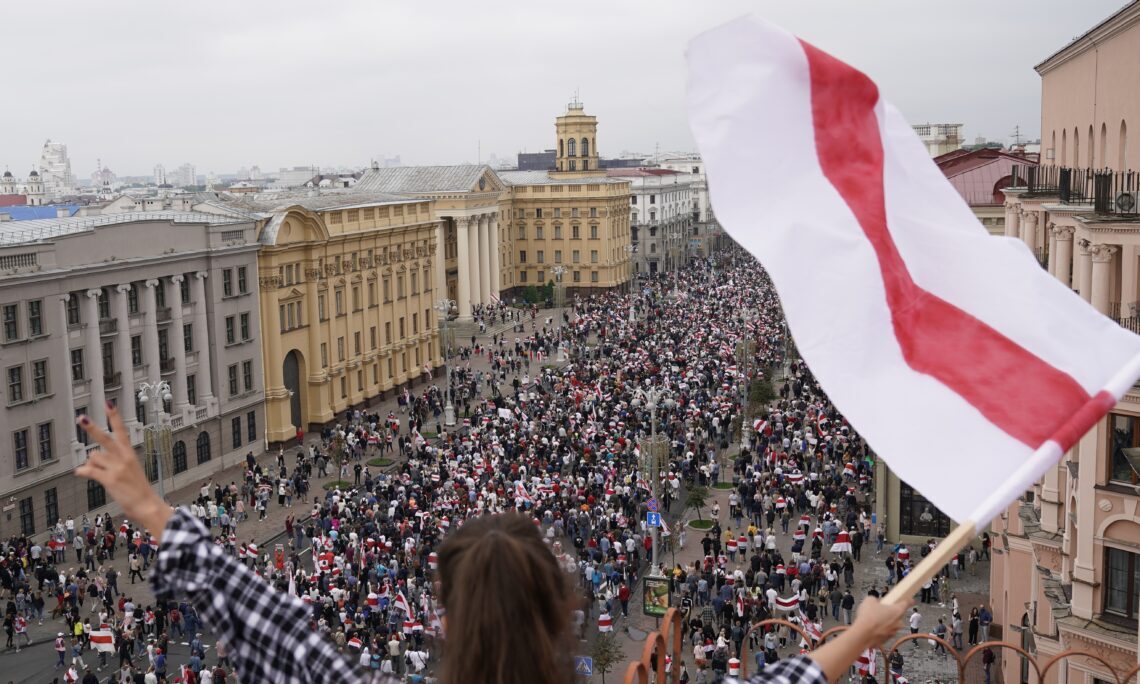 We continue to be amazed by the strength, resilience, and courage of the Belarusian people demanding their voices be heard. (AP Photo/Evgeniy Maloletka)

As delivered by Chargé d’Affaires Courtney Austrian
to the Permanent Council, Vienna
February 4, 2021

Mr. Chair, the United States welcomes this opportunity to recognize the upcoming Day of Solidarity with the people of Belarus this Sunday, February 7.  This Monday, we will mark six months of peaceful protests following the fraudulent August 2020 presidential election in Belarus.  We continue to be amazed by the strength, resilience, and courage of the Belarusian people demanding their voices be heard.  In the face of rising repression from state security services and biased courts, they have continued their active and vibrant movement in small gatherings and courtyards from Homiel to Minsk to Brest, as well as in diaspora and exile communities.

There can be no question of the resolve of the citizens of Belarus to determine their own future and freely pick their leaders.  Mr. Lukashenka has announced he will hold the All Belarusian People’s Assembly on February 11— a conference that has no claim to legitimacy as it deliberately fails to engage broader society or the protest movement and its leaders, including Svyatlana Tsikhanouskaya and the Coordination Council.

For the sake of Belarus’s future, we renew our call to the Lukashenka regime to engage in open dialogue with Ms. Tsikhanouskaya and other members of Belarus’ growing civil society and opposition.

Rather than engage in contrived national assemblies, the Belarusian authorities need to take real steps to end the crisis that their election fraud and ongoing crackdown has caused.  The Belarusian authorities should carry out the recommendations set out in the Moscow Mechanism report, delivered by Professor Wolfgang Benedek in this chamber last November.  These include the immediate release of all political prisoners and the end of the unconscionable violence being committed by security services against citizens peacefully seeking a better, more democratic future.

Unfortunately, the human rights situation in Belarus continues to deteriorate.  Independent media have increasingly become a target as discussed at a UN Arria Formula meeting last month.  Tut.by journalist Katsyaryna Barysevich was arrested in November after her reporting exposed the authorities’ lies about the death of 31-year-old Raman Bandarenka, a peaceful protester beaten so badly by police and pro-government civilians close to Lukashenka that he died in the hospital the next day.  Ms. Barysevich has now been in pre-trial detention for 77 days simply because she reported the facts.  Blogger and activist Ihar Losik, who recently concluded a six-week hunger strike to draw attention to the plight of the opposition in Belarus, has been in jail for almost seven months on charges of organizing demonstrations prior to the election.

The authorities are using draconian methods to hide the truth and avoid accountability for their human rights abuses.

We join democratic partners and human rights organizations around the globe in urging the immediate release of the almost two hundred political prisoners currently imprisoned in Belarus, some of whom have been held on trumped-up charges since well before the presidential elections last August.  The use of violence to suppress dissent, punishing the exercise of the right to peaceful assembly and freedom of expression fly in the face of the very commitments Belarus has made as an OSCE participating State, as well as Belarus’s obligations under international law.  Those members of the Lukashenka regime and its security services who perpetrate brutality against peaceful protestors, members of opposition parties, and independent journalists need to understand that their current impunity will not last forever—sooner or later, they will answer for their abuses.

The United States thanks the OSCE Troika for its offer to facilitate a national dialogue between the Belarusian authorities and the political opposition.  We continue to urge Alyaksandr Lukashenka to accept the Troika’s offer.

Belarusian Nobel Laureate Svyatlana Alexievich once said, “Freedom is not an instantaneous holiday, as we once dreamed.  It is a road.  A long road.”

On the occasion of the International Day of Solidarity with Belarus, the United States recommits to traveling with the Belarusian people down that long road, each and every day, for as long as it takes for them to realize their aspirations.