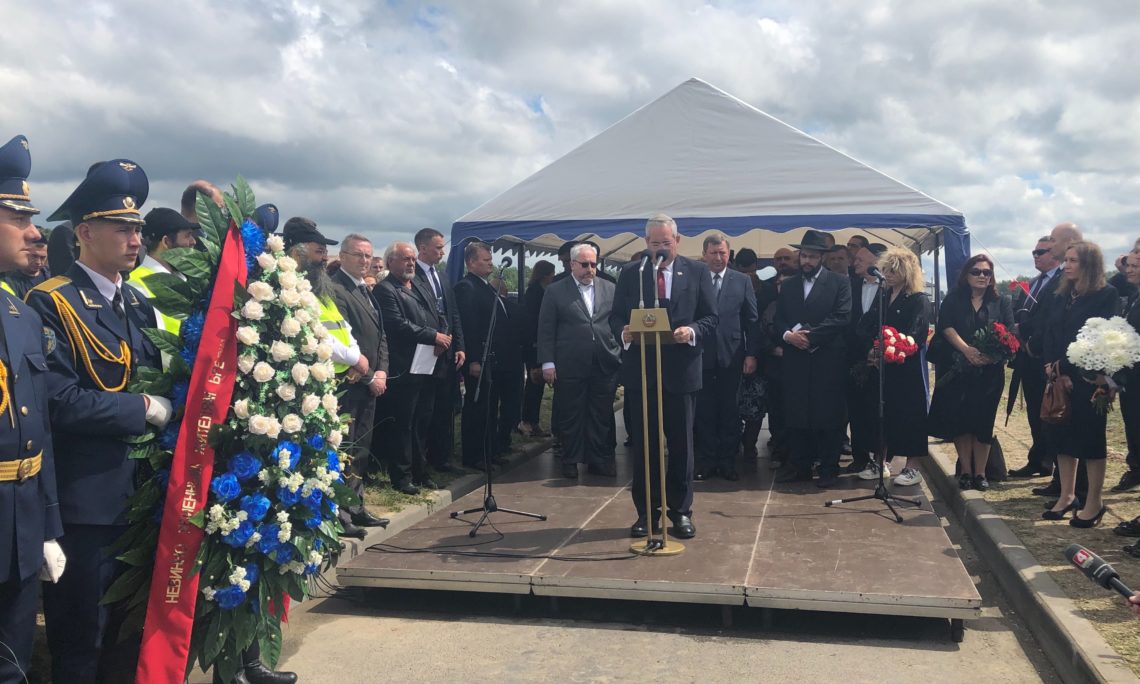 Paul Packer
Chairman of the U.S. Commission for the Preservation of America’s Heritage Abroad
Remarks at the ceremony of reburial of the Brest ghetto atrocities
May 22, 2019

On behalf of the United States Government and President Donald Trump, I would like to extend my gratitude to all of you who have joined us today for this ceremony.  In particular, I want to thank Ambassador Shoham; representatives from the Belarusian government; and the leaders of Brest’s storied Jewish community. It is a privilege to be with you today as we honor victims of the Holocaust.

We stand today on hallowed ground. Jews first settled in Brest almost 800 years ago, and by 1900 they made up around two-thirds of the city’s population, 30,000 strong.  Many of Europe’s wisest and most influential rabbis have roots here, helping to form a society rooted in ethics, compassion, and learning that prospers to this day.

For hundreds of years, the Brest Jewish community was a center of Jewish life in Eastern Europe, famed for its study of Torah.  The first yeshiva was founded here in the 16th century, leading to the establishment of an entire education system reflecting the values and innovations of Haskalah, or the Jewish Enlightenment.

Before the Holocaust, Brest was home to nearly 40 synagogues and study halls, Jewish schools, and a thriving community of young, brilliant minds, including Menachem Begin, the future Prime Minister of Israel and winner of the Nobel Peace Prize. Jews made up a critical part of this city’s, and this nation’s, cultural fabric.

It is for the Jews of that remarkable era that we grieve today. They were scholars, artists, doctors, lawyers—fathers, mothers, sons, and daughters.  And they were slaughtered – without mercy, without a second thought – by the Nazis who invaded their home.

As we remember those whose lives were taken here, we must also renew our commitment to never forget all the victims of the Holocaust, and to never again allow such evils to be committed against the Jews or any other people.  We must reaffirm our duty to fight against the rising tide of anti-Semitism, and all other forms of bigotry, that threaten to plunge us once again into the darkness.

I am deeply grateful to the Belarusian government, whose extensive efforts to preserve Jewish heritage are admired and appreciated by many in the U.S. government and around the world. They have undertaken a sacred duty to protect the evidence of our history.

I am proud to spend each and every day working in furtherance of this mission, one that is critical to fulfilling our promise never to forget the atrocities of the Shoa.

There is no doubt that this work is more important today than ever before.  Even as Jews around the world grow in number, practice their faith, and devote themselves to the wellbeing of their communities as they do here, anti-Semitism is on the rise.

Yet, despite our challenges, I am an optimist.  Standing here today, seeing the dedication of so many to honor the victims of the Holocaust, I’m filled with hope for the future.

Even during a difficult and polarizing time for our world, I feel a renewed faith that we can unite in recognition of our shared heritage and the importance of preserving it l’dor va’dor, from generation to generation.