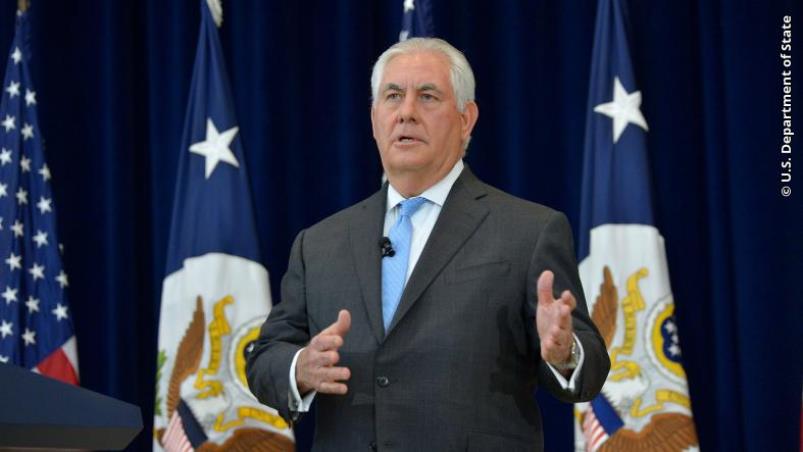 On December 27, Secretary of State Rex Tillerson published an editorial in The New York Times, entitled “I Am Proud Of Our Diplomacy”. Here are some of the highlights:

“Americans should be encouraged by the progress the State Department and United States Agency for International Development have made in pushing for global peace and stability.”

“I am proud of what our State Department and Agency for International Development teams around the world have accomplished this year, and our progress will continue in 2018 and beyond.”

“Our peaceful pressure campaign has cut off roughly 90 percent of North Korea’s export revenue, much of which is used to fund illegal weapons development. We hope that this international isolation will pressure the regime into serious negotiations on the abandonment of its nuclear and ballistic missile programs. A door to dialogue remains open, but we have made it clear that the regime must earn its way back to the negotiating table. Until denuclearization occurs, the pressure will continue.”

On the campaign to defeat ISIS:

“The Global Coalition to Defeat ISIS has accelerated operations and has recaptured virtually all of previously held Islamic State territory in Iraq and Syria. While our military was helping clear Iraq and Syria of Islamic State forces, our diplomats were following up with humanitarian aid and assistance, such as clearing land mines, restoring water and power, and getting children back in school.”

On the situations in Pakistan, Russia, Syria, and Iran:

“On Russia, we have no illusions about the regime we are dealing with… Absent a peaceful resolution of the Ukraine situation, which must begin with Russia’s adherence to the Minsk agreements, there cannot be business as usual with Russia.”

“We are confident that the fulfillment of these talks [Geneva political process] will produce a Syria that is free of Bashar al-Assad and his family.”

“The flawed Iran nuclear deal is no longer the focal point of our policy toward Iran. We are now confronting the totality of Iranian threats.”

On efforts to redesign the State Department:

“Our redesign doesn’t involve simply shifting boxes on an organizational chart. Our changes must address root problems that lead to inefficiencies and frustrations. By making changes like streamlining our human resources and information technology systems, better aligning personnel and resources with America’s strategic priorities, and reforming duplicative processes, we are giving our people more opportunities to flourish professionally and spend more time confronting the global problems they have dedicated their careers to solving.”

“I remain optimistic about the power of diplomacy to resolve conflicts and advance American interests. My confidence comes from the knowledge that our efforts are carried out daily by patriotic and dedicated State Department employees who make sacrifices to serve with patience and persistence and who, by advancing democratic values the world over, are protecting our citizens’ rights to life, liberty and the pursuit of happiness.”