Home галоўная старонка | News & Events | U.S. National Statement on the Report under The Moscow Mechanism in Relation To Belarus 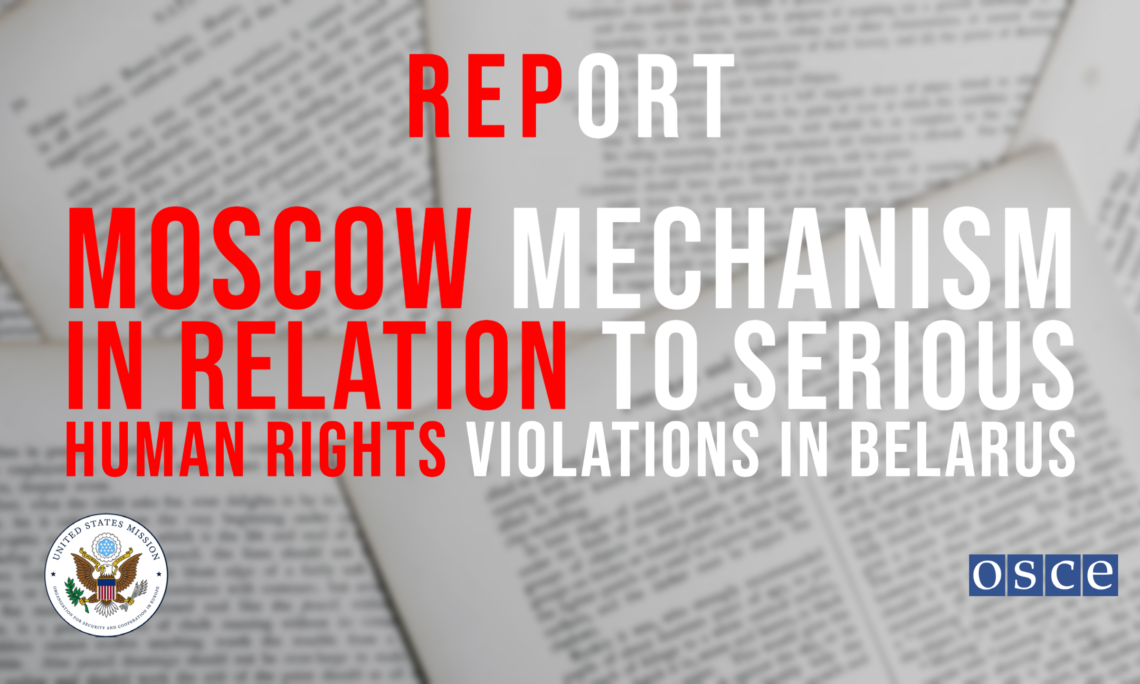 U.S. National Statement on the Issuance of the Rapporteur’s Report Under the Moscow Mechanism on Alleged Human Rights Violations Related to the Presidential Elections of August 9 in Belarus

U.S. National Statement on the Report under The Moscow Mechanism in Relation To Belarus

Mr. Chairman, the United States thanks OSCE Moscow Mechanism Rapporteur Professor Wolfgang Benedek for his compelling, thorough, and exceptionally well documented report.  The Moscow Mechanism is a way of asserting the standards of civilized conduct and appropriate conduct within the OSCE area, and as such it is of vital importance.  This report clearly finds that the August 9 presidential elections in Belarus were “neither free nor fair” and that the Belarusian authorities have engaged in sustained and systematic violations and abuses of the human rights and fundamental freedoms of the Belarusian people.

The strength of the report lies in the extensive, credible testimonials by victims and eyewitnesses, especially in its section on torture, where the report details the severe abuse of detained protesters, including vicious beatings, horrific humiliations, the use of stress positions, people being forced to swallow paper or other inedible objects until they vomited, people being stacked on top of each other like firewood or forced to stand naked outdoors in the cold for hours, the use of electric shock, the use of tear gas in enclosed rooms, rape and threats of rape, particularly these threats against women trying to assert their rights in Belarus, intentional starvation, threats of reprisal against family members, threats against the children of the protestors and the family members of protestors, and denial of medical care for serious injuries.  These are all things going on now within the OSCE space? On a continent that presumes to be a civilized place under the standards of the Helsinki Accords and the Final Act?

These appalling abuses are taking place in the center of Europe in 2020.  It is shocking that the Belarusian security services would treat their fellow citizens in such an unacceptable manner, and even more shocking that such lawlessness and brutality is occurring with total impunity.  Every single person involved in these abuses should be held to account and brought to justice.

Week after week, the world watches in dismay as the Belarusian security services deploy brutal practices against pensioners, women, striking workers, college students, and others peacefully protesting for a democratic future.  Imagine the bravery it takes to go out and demand your rights in Belarus today, knowing what cruelty awaits you on the streets and what could happen to you if you are detained.  That, of course, is the objective of the violence, abuse and illegal behavior.  We are inspired by the strength and dignity of the Belarusian people and we are deeply disturbed that Belarusian authorities have begun equating these brave demonstrators with terrorists in an apparent attempt to justify further violence against them.

The recommendations in this report provide the Belarusian authorities with a roadmap out of this crisis.  The United States reiterates its previous statements that Belarusian authorities must allow the people of Belarus the self-determination to choose their own leaders through a truly free and fair election under independent observation, including a robust OSCE/ODIHR observation mission.  As our colleague from the United Kingdom has stated, legitimacy is conferred in the modern world only by free and fair elections.  This is the principle of the Helsinki Accords and represents civilizational advancement in the 21st century.  Belarusian authorities must end this violence against their own people and ensure accountability for those found responsible for past abuses; release all those who have been unjustly detained; and engage in genuine, meaningful dialogue with representatives of the Belarusian society.

Finally, Mr. Chairman, with great emphasis, finally, the United States remains deeply concerned at the continuing detention of Coordination Council member Maria Kalesnikava.  For her efforts to facilitate a national dialogue we urge Belarusian authorities to release her immediately.