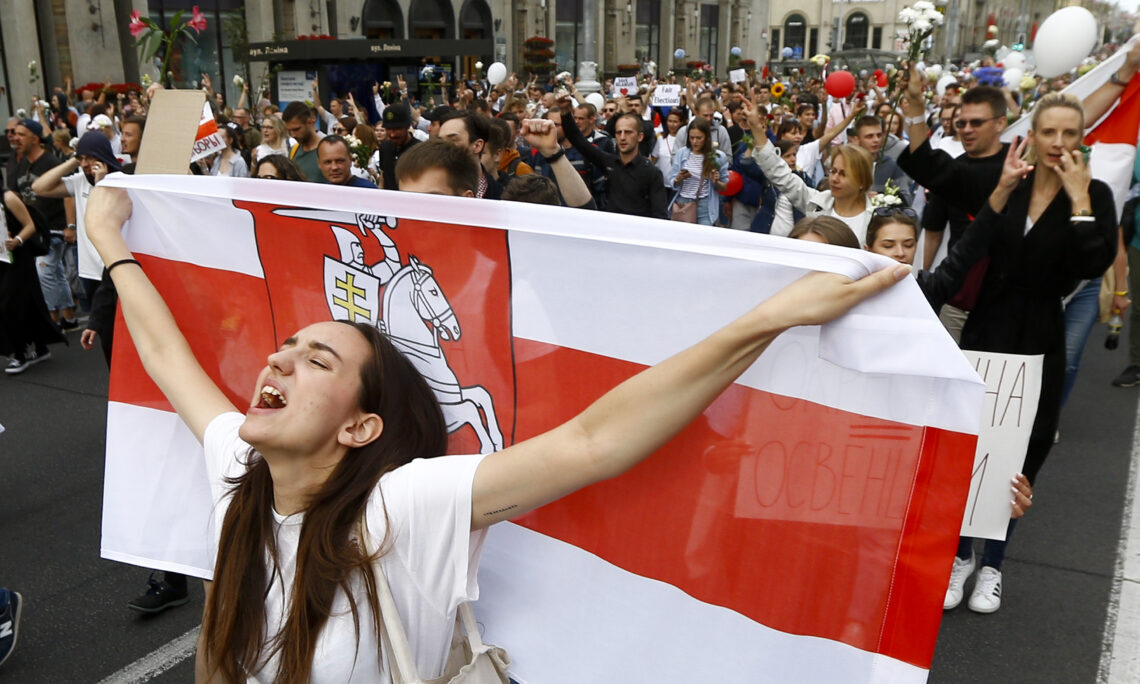 A woman reacts as she marches holding an old Belarusian national flag in the center of Minsk, Belarus, Friday, Aug. 14, 2020. Some thousands of people have flooded the cnetre of the Belarus capital, Minsk, in a show of anger over a brutal police crackdown this week on peaceful protesters that follo

USOSCE: Role of Women in Belarus’s Fight for Democracy

As delivery by Chargé d’Affaires Courtney Austrian
to the Permanent Council, Vienna
March 11, 2021

Women have long been at the forefront of civil and political rights movements across the globe.  As Secretary Blinken said earlier this week, “it is often women who lead the charge for human rights, democracy, and justice; including in places where women hold much less than half the political, economic, and social power.  That’s why the equal rights and dignity of women is a foreign policy priority for the United States.”

In my own country, women led the fight for equal voting rights.  These women in white clothes, known as the “Suffragettes,” were tireless advocates for gender equality, and their efforts have given me and millions of American women a voice in choosing our leaders.  Today, I would like to honor a new generation of women in white clothes, this time from Belarus, who just like the Suffragettes did, are standing up for civil and political rights, and by so doing, shaping the future of their country.

Svyatlana Tsikhanouskaya has sought to reform Belarus by advocating for free and fair elections, demanding authorities be responsive to the needs of all Belarusian citizens, and holding those who abuse power to account.  Activists like Nina Bahinskaya spent their whole lives pressing for freedom.  Belarusian authorities have now seized half of Nina’s pension, which is less than $100 per month, to pay the fines they have levied against her.  Her crime was going for a walk, as she famously said.  Democracy activist Maria Kalesnikava and her partners mounted a historic and sustained challenge to the 27-year dictatorship of Alyaksandr Lukashenka.  For that, Belarusian authorities abducted her and attempted to forcibly expel her from her own country.  She resisted expulsion, was arrested, and imprisoned.  Today, she is among over 260 political prisoners in Belarus.

On March 8, the Secretary of State honored Maria in absentia with the International Women of Courageaward for her advocacy.  We echo Secretary Blinken’s call for her immediate release.  We look forward to the day she can once again take her rightful place in Belarusian society as a free citizen.

Human rights activist Marfa Rabkova has been detained since September for documenting evidence of human rights violations, including torture and other ill-treatment of peaceful protesters by law enforcement officials.

Katsyaryna Andreyeva and Daria Chultsova, a reporter and a camerawoman, covered a protest in November and were arrested for simply ensuring Belarusians had access to the truth.  Katsyaryna Barysevich, a journalist with independent media outlet TUT.by, was sentenced to half a year in prison following the publication of an article in which she cited medical documents indicating that protester Raman Bandarenka died of severe injuries and had 0% blood alcohol level at time of death—contrary to the regime’s claims.

Today we honor these brave women, and we call on Belarus to release them and all others being held for exercising their human rights and fundamental freedoms.