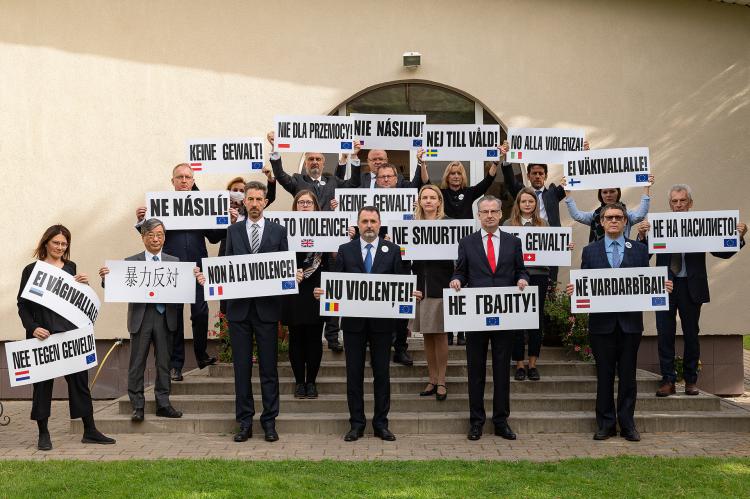 Today, the heads of missions of the EU and EU Member States represented in Minsk, the United Kingdom, Switzerland, and of the United States of America met with Belarus’ Foreign Minister Vladimir Makei.

The diplomats inquired about the Belarusian authorities’ plans with regard to meeting the demands of the country’s constitution and international obligations where they pertain to the fundamental rights and freedoms and the rule of law, which would be expressed, first and foremost, in the following:

– cessation of detentions and violence toward and inhumane treatment of peaceful protesters;

– release of all political prisoners and those unjustly detained;

– prosecution of those who authorised and perpetrated acts of violence and inhumane treatment that have resulted in injuries, trauma, loss of life and a general environment of lawlessness;

– conduct of free and fair elections under independent observation.

The diplomats also informed of the potential courses the respective bilateral relations could take should the authorities of Belarus take tangible and significant action to restore the rule of law.

The heads of missions called upon the host-country authorities to refrain from actions impeding the ability of the diplomatic community in Belarus to execute their standard diplomatic duties in an atmosphere free from intervention and intimidation. They also shared their expectations that the Belarusian side would agree to a return of the Lithuanian and Polish Ambassadors and their diplomatic staff to Belarus by the end of the year.

The diplomats reiterated that their governments stand ready to support and facilitate an inclusive national dialogue in Belarus, safeguarding Belarus’s sovereignty and independence as well as its safe, democratic and prosperous future.